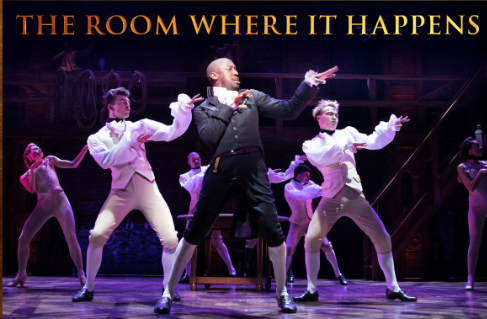 Has there ever been a show with as much hype as Hamilton? Not in my lengthy theatre going experience: not Cursed Child, not any of the celebrity Hamlets and not even, the show to which Hamilton is second cousin, Evita, Andrew Lloyd Webber and Tim Rice’s paean to that oft overlooked femme fatale of Argentinian political history.

Swathes of the audience, particularly the Americans, know every word of Hamilton and judging by the whooping that greeted every number, they were absolutely loving it.

There is a lot to love. The choreography is inventive and slick, there are stellar performances from Giles Terera as Aaron Burr, Rachel John as Angelica, RSC stalwart Obioma Ugoala as George Washington and show stealing Michael Jibson as a gorgeously naughty George III. Hamilton himself, the overlooked American founding father who finally has own show and quite probably an action figure by now, is brought to life by Ash Hunter in a warm, sympathetic and utterly credible performance.

As someone guilty of overlooking all of America’s founding fathers on a regular basis, something of which most of my compatriots are likely to be equally guilty, I found Hamilton’s story fascinating, touching and brave for a musical. An orphan from the Caribbean, he fought in the War of Independence and set up the American financial system having done something quite impressive with government borrowing- I said it was brave.

If you enjoy rap, you will enjoy Hamilton. If you are less keen you may find the first half very impressive, witty and energetic but also slightly hard going. The second half is less raptastic and therefore much more enjoyable if your taste is for more conventional musicals.

The best number for me was The Room Where It Happens- smart lyrics and a strong melody about jockeying for political influence, a song that would not have been out of place in Evita, with which it shares the theme of breaking away from the British Empire, a hero who has come from nowhere and a chart-topping soundtrack, even if there is nothing to match the emotional punch of Don’t Cry for me, Argentina.

Hamilton’s greatest achievement may well be the young average age of the audience, really noticeable here as it is at The Cursed Child. It performed the semi-miraculous feat of making teenagers view theatre as cool and sparking genuine interest in History – my Medieval History students spontaneously perform rap battles in my classes: Henry II versus Thomas Beckett? It’s on!

My daughter, who also knows every word, argues that Hamilton is a new, popular aetiology for America to unite around, comparable to The Aeneid for the Romans, and the Americans do indeed seem thrilled to see these seemingly staid figures from History class rapping across the stage.

For British audiences, most of whom are absolutely loving the show, that is a harder leap to make and there is no getting away from the fact that some of the jokes do not travel — the reference to New Jersey is met with polite puzzlement, while the tenuous grasp many of us have on American History (apologies if that is just me!) may lead to a frantic round of word association to try to keep up.

For reference Lafayette, channelling Prince, is a general not a department store in Paris. When all the Americans get excited and applaud Thomas Jefferson, of whom we have all heard, that’s because he was a president and nothing to do with lightbulbs or aeroplanes because that would be Thomas Eddison and Jefferson Airplane, a pop group. Who knew? Everyone in America at a rough guess.

The cost of Hamilton tickets is eye-watering and nope, I am not admitting what I paid, and there is an awe-inspiring degree of security, to stop the nefarious activity of touts, that just stopped short of finger-printing ticket buyers, and a refusal to issue tickets in advance. This should have left me whingeing about queueing from 6.30 pm to get into a show that starts at 7.30 but it was actually so magnificently choreographed by Victoria Palace Theatre that I only had time to send one tweet in the 4 minutes I was in that line.

What I would like now as I recover from the shock of quite how much I don’t know  is one of those lovely shows such as Mr Foote’s Other leg and Nell Gwynn, that mix history, comedy and just a little bit of singing, to tackle the Hamilton story but if you like a lot of singing, Hamilton itself is definitely the show for you.