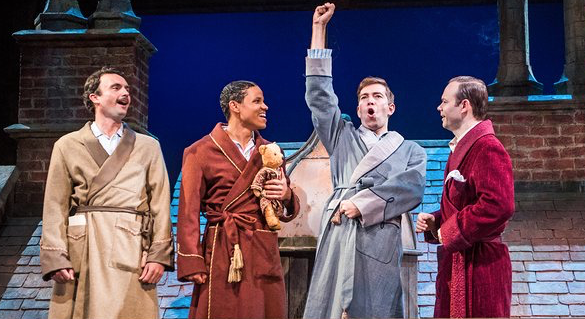 Shakespeare wrote a lot of really good plays but Love’s Labour’s Lost is not one of them and a production as luminous as Christopher Luscombe’s at the Theatre Royal Haymarket is worthy of as many compliments it is possible to heap upon in it.

There is a judicious sprinkling of slapstick comedy and outstanding music – some channelling Gilbert and Sullivan-while nods to Brideshead and Peter Pan give the King and his pals the comforting glow of familiarity. The set is breathtaking as are the costumes: the Princess and friends are dressed to rival scrubbed-up Audrey Hepburn in My Fair Lady.

But it is not just about looks and belly-laughs. The verse is accorded the respect it deserves and is spoken with intelligence, enhanced by music rather than drowned out. I am sure I am not the only one to have rushed home to re-read the play, feeling I have seriously underestimated it.

Sitting in a theatre surrounded by people who are having a simply marvellous time is a special experience and not necessarily one expected from a play full of convoluted wordplay, dated puns and Latin jokes that are obscure even for someone who rather likes obscure Latin jokes. The word “lovely” was the main comment I overheard on the way out.

The conceit of setting such a frivolous play just before WWI gives a real edge.  This group of young rich people have nothing better to do than play silly games but their spoilt, decadent lives are about to be shattered by a war that does not have the glory of the battles of Alexander, Pompey and the other heroes of the Masque they watch.

A comedic showering of Hector with a storm of red petals, resolves into a stark foreshadowing of the poppies of Flanders and the lives that will be lost. The fallen petals lie on the stage as we watch the uniformed King and his friends march off as the play ends. When we next see them, they will be in the midst of Much Ado and the Great War itself.

I have done a lot of Shakespeare in my time and I would doubt you will see a better production than this unless, of course, it’s the companion piece of Much Ado with the same cast. I hope to see that next week-everyone says that is marvellous too.

The good news if you are planning a trip, and I would strongly urge you to do so, is that there are plenty of tickets around, including bargain ones (check the TKTS website), probably because the production has been around for a while, has toured and is in the absolutely massive Theatre Royal.

Comparisons with the last RSC Love’s Labour’s Lost with David Tennant (20o8) are inevitable for those of us lucky enough to have seen it. You will doubtless have seen the very fetching pictures from it of the 10th Doctor sporting a powder blue doublet. Just to rub it in, I saw him in LLL at the matinee and then Hamlet in the evening – a top day!

Tennant’s acidic Scot, Berowne, was a joy to watch and listen to but this production has the edge. It is much more of an ensemble piece with memorable performances from all four of the main actors not just Edward Bennett as Berowne. Sam Alexander is an actor bursting with charisma.

Loving this production feels particularly fitting because the only memorable part of the first LLL I saw (RSC 1993) was Christopher Luscombe, then an actor. He took the small, comic part of Moth with a charm my husband and I have never forgotten. The same charm shines through this whole production.  What was that word again?  Ah, yes: lovely.

One thought on “Love’s Labour’s not so lost”